Antietam 157 Years After the Bloody Battle 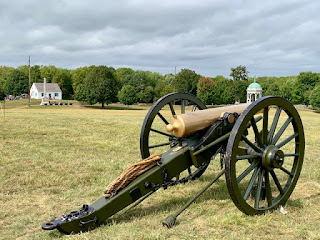 We drove one overcast and pleasant day to Antietam National Battlefield in Sharpsburg, MD, 157 years since the bloodiest battle took place. We stopped on the way to see the Washington Monument Park, taking the minor Zittelstown Road. The paved road narrowed to one lane, flanked by old buildings leaning from age, rust, and neglect and surrounded by so much collected junk overcome by wild vegetation that I expected rabbits to jump from the tall grasses and weeds.


The hilly landscapes seemed deserted of humans. Yards and old homes were jutting walls and porches right at the edge of the twisted and narrow road. It looked like a higher being had decided to throw up ratty barns and homes in a landscape of noble and historical decrepitude.


Gen. Lee decided to take a stand on September 15, 1862 at Sharpsburg, Md, when he learned that Harpers Ferry, WV, had fallen.


Sharpsburg was a 100-year old community with 1,200 residents. As William Snakenberg, a private from the 14th Louisiana, wrote, “That night we lay in line of battle behind a small brick church called the Dunkers Church, situated on the Hagerstown Turnpike, with arms, and ready to move at any moment.”


On September 16, 1862, after Gen. McClellan had obtained a copy of Gen. Lee’s operations plan, Special Order 191, Union troops crossed Antietam Creek and engaged Gen. Lee’s left army at 6 p.m. The battle of Antietam took place on September 17, 1862 at dawn and lasted 12 hours, ending around 6 p.m.
Counting both sides, almost 100,000 soldiers were engaged in battle; 23,000 were reported dead, wounded, or missing. It is not definitive who won the battle, but the Union Army held the field. McClellan did not chase Lee’s retreating army and, as a result, he was relieved of his duty later by President Lincoln. 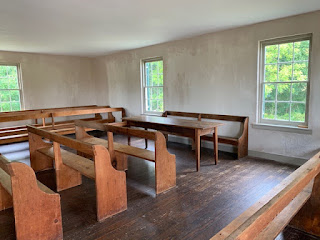 The Dunker Church, built ten years earlier by “pacifist German Baptists Brethren became a focal point for Union attacks the morning of the battle.” The window frames of the original church were preserved with names and initials of soldiers carved onto the windowsills. The front pew and table are the only ones left from the original furniture. 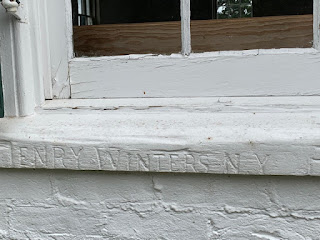 The 24-acre cornfield experienced the bloodiest fighting in U.S. history when Hooker’s and Mansfield’s Union soldiers fought Jackson’s Confederates for three hours. “Many regiments on both sides were cut to pieces. Hays’ Louisiana Brigade suffered over 60-percent casualties in 30 minutes.” It was poignant to watch a John Deere combine harvest corn on the same fields which had been soaked by the blood of brothers and fertilized by their corpses 157 years ago. 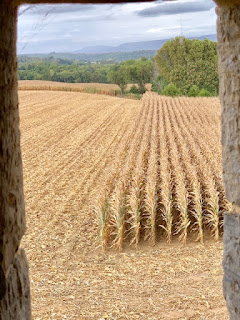 In the West Woods more than 2,000 Union soldiers were killed or wounded in a mere 20 minutes. The North Woods saw the fight and Union attack led by Gen. Hooker who had spent the night on the Poffenberger farm.  In the East Woods there was fighting the night before the battle, a veritable volley of musket bullets. The Lower Bridge (Burnside Bridge) was held for three hours by 500 Confederate soldiers before Gen. Burnside and his Union soldiers captured it and were able to cross the Antietam Creek. The huge sycamore tree at the end of the bridge is still standing today – an early witness to history when it was just a young sapling. 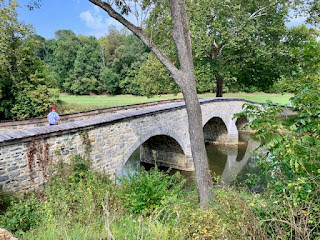 The Sunken Road or Bloody Lane, a farm lane, experienced three hours of intense fighting between 2,200 Confederate soldiers and 10,000 Union forces held at bay. The fighting fell back to Piper Farm but the Union “had suffered too many casualties to pursue their advantage.”
William Childs, surgeon with the 5th New Hampshire Infantry said in October 1862, “When I think of the battle of Antietam, it seems so strange. Who permits it? To see or feel that a power is in existence that can and will hurl masses of men against each other in deadly conflict – slaying each other by the thousands… is almost impossible. But it is so – and why, we cannot know.”

Surgeon Charles Dunn, when he saw the number of bandages, lanterns, and food that Clara Barton had brought to his Antietam hospital, he nicknamed her “The Angel of the Battlefield.” Clara gave help to the wounded on both sides. The battle created “one vast hospital” as one Hagerstown newspaper wrote and a legion of amputees from the 17,000 wounded soldiers.


George Allen, a Union soldier, vividly described, “Comrades with wounds of all conceivable shapes were brought in and placed side by side as thick as they could lay, and the bloody work of amputation commenced.” Such was a field hospital back then – many fatalities were the result of disease acquired after medical care, not from actual battlefields.


The existence of 500 cannons, most of them 1,200 pounds of bronze barrels, created an atmosphere that most would describe as “artillery hell” on earth. Confederate artillery batteries were positioned on the bluff in the proximity of the Visitor Center today. 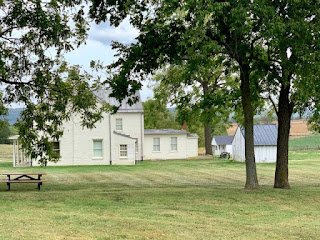 Samuel and Elizabeth Mumma’s Farm was set on fire deliberately by Confederate soldiers who were ordered to burn it to prevent its use by Union sharpshooters. Samuel Mumma’s family had fled to safety before the battle. They tried to collect $10,000 in damages from the U.S. government at the time but were turned down and, according to the guides, referred to Confederate authorities for collection of damages.


No civilians were killed in the horrible 12-hour battle because civilians took shelter in basements, caves, and nearby churches.  But they suffered for years and some have died from disease carried by some of the 80,000 soldiers who stayed for six weeks in their small community.


In addition to extensive property damage, the small town of Sharpsburg found their homes, barns, and churches converted into more than 100 hospitals in dire need of supplies: food, clothes, blankets, bandages, and firewood. Their formerly fertile corn fields were now graves for almost 4,000 thousand fallen soldiers.

Union soldiers buried the bodies of both friends and foes.  The deceased found their hurried resting place in single or in shallow mass trenches. Photographer Alexander Gardner took pictures of the battlefield burials which he named “Graves of Federal soldiers at Burnside Bridge” and “Federal buried, Confederate unburied, where they fell.” Nobody had time to measure them for coffins or prepare them for a proper burial. 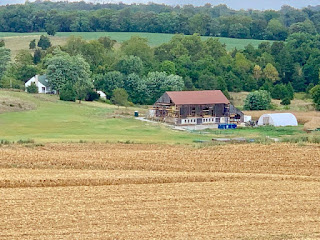 William Roulette, whose farm was occupied by the troops, wrote: “The battle caused considerable destruction of property here. My nearest neighbor lost his house and barn by fire [Samuel Mumma]. I lost three valuable horses and sheep, hogs, poultry, vegetables, and indeed everything eatable we had about the house so that when we came back, we were obliged to bring provisions with us.”


Following the Battle, the Roulette’s house and barn were utilized as hospitals for the wounded and 700 dead soldiers were buried hastily in their farm fields. Roulette continued, “Our youngest died since the battle, a charming little girl twenty months old, Carrie May – just beginning to talk.” She died of typhus. 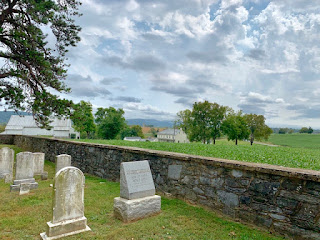 Not far from the farm is the Mumma Cemetery. Aside from local family members interred here, there are also veterans of other wars who were buried in this cemetery until the turn of the 20th century.  In 1870 the Mumma family deeded interest in this burial ground to local families so that “neighbors who suffered from war and came together to rebuild their community, now rest together in this peaceful enclosure.”


Some of the farm buildings still standing date back to 1760s and archeological digs had found in their proximity trash buried in the early 1800s which gave ample evidence of the life in these parts at that time.


The soldiers left behind letters and diaries, weapons, clothing, and whatever personal items and equipment they may have carried in order to record for posterity the bloodiest battle of a four-year civil war which defined our nation.
Captain James Hope of the 2nd Vermont Infantry, sketched the Battle of Antietam as he experienced it and, after the war, he painted panoramic works of art based on his sketches. 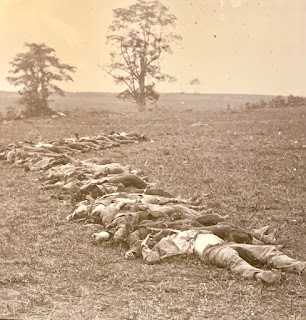 
A Bible from the Dunker Church was plundered by Sergeant Nathan Dykeman of the 107th New York Infantry. He brought it back to New York with him and kept it until his death in 1903. At that time, his sister gave it to the veterans of the regiment who returned to the church 41 years after the battle.


There is a photograph of President Lincoln, taken by Alexander Gardner a few weeks after the battle, speaking to General George McClellan, commander of the Union forces at Antietam. Because McClellan did not chase and destroy Gen. Robert E. Lee’s battered army as President Lincoln desired, he relieved McClellan of his command. McClellan challenged Lincoln for the presidency in 1864 but he lost to the war president.


The last unmarked battlefield burial was discovered in October 2008 on the historic David R. Miller farm.  A visitor in the park found bone fragments and a piece of leather at the mouth of a groundhog burrow.  Upon closer scrutiny, 24 different bone fragments from the skull, legs, and feet were unearthed. In addition, seven coat buttons, 3 New York State Excelsior and 4 U.S. general service, and New York State cuff buttons, state-issue for coat or jacket, and a Union waist belt plate with leather still attached to the back, were found. The remains of the soldier were reburied with full military honors on September 17, 2009 at the Saratoga National Cemetery.


“Twenty men received Medals for their gallantry on the Battlefield of Antietam. Three medals were awarded for action during the Battle of South Mountain on September 14, 1862. Among the recipients were Private Samuel C. Wright, 29th Massachusetts Infantry and First Lieutenant George W. Hooker, 4th Vermont Infantry.  “Hooker advanced alone and on horseback into the Confederate lines and captured more than one hundred southern soldiers and a Confederate battle flag.” Wright was involved in 30 battles and was wounded five times, assailing the Confederate position at Sunken Road. 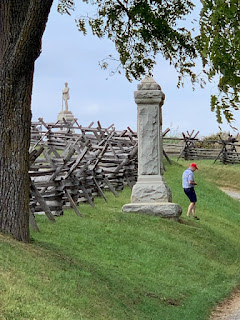 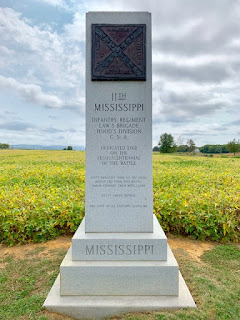 The Antietam National Battlefield is hallowed ground, a place of national reflection and remembrance. Monuments erected by different organizations, memorializing different regiments, are scattered across the fields where they fought and held positions.


Fieldwork in battlefield archeology led to discoveries and evidence of lines of fighting and how the armies were positioned and the direction they fired. Bullets, shell fragments, intact, unfired bullets dropped when loading guns helped them map the battlefield. Armies used a variety of weapons and ammunition and it was thus possible to identify the exact location of units and the firing lines. Artifacts were flagged, tagged, and GPS-ed. 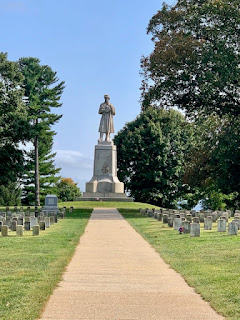 The Antietam National Cemetery was dedicated in 1867 when disinterred Union soldiers were reburied there. President Andrew Johnson, seven governors, and more than 10,000 people attended the event. The Confederate soldiers were re-interred at three national cemeteries in the Maryland area, Fredrick and Hagerstown among them.


In 1933 the War Department transferred the battlefield to the National Park Service which has preserved the area with care to maintain the same roads, fields, forests, and houses in order to keep the landscape close to its September 1862 appearance. At the time, Civil War veterans were part of the Antietam Battlefield Board, which was established to research and guide the early preservation efforts. Through land acquisitions by different groups, the Antietam National Battlefield has grown from the original 65 acres to more than 3,000 acres by 2012. 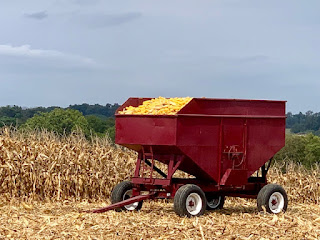 Harvesting in progress on September 16, 2019

The fertile fields of corn and soybean have been enriched by the blood of brothers fighting brothers and the monuments stand testament to the fact that the events of that fateful day should never disappear from our history books or fade from collective memory because on that day, when thousands have sacrificed for what they believed in, America forever changed.

Posted by IleanaWrites at 5:40 AM