A Visit to Harpers Ferry on Labor Day


Harpers Ferry, West Virginia, once a bustling government factory town with over 3,000 inhabitants in its heyday, is nestled in Jefferson County, at the confluence of the Shenandoah and the Potomac Rivers. It exists today because the U.S. Armory (located here by George Washington) manufactured small arms here for sixty years, muskets, rifles, and pistols (more than 600,000) from 1801 until the opening days of the Civil War in 1861. With less than 300 inhabitants today, Harpers Ferry was the location of the incipient U.S. military industrial complex.  The factory’s 400 workers produced more than 10,000 weapons a year.


Harpers Ferry was settled in a valley rich in natural resources: deposits of iron ore, limestone, timber from hardwood forests, and abundant water which attracted many industries.  The town is famous for its picturesque streets, beautiful vistas, a railroad, two rivers, shale rocks, sandstone, and most significantly, for its contribution to the history of the United States.


One of the greatest engineering efforts of the 18th century America was the Patowmack Canal, “the life-long dream of George Washington.”  What is left of it is visible today by Virginius Island.  This bypass canal was linked to others in the Potomac River watershed, making trade more efficient in the area. 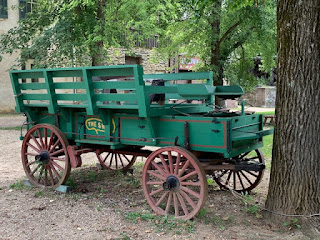 On the eve of the Civil War, there were numerous buildings on Shenandoah Street, facing the river – a boarding house, armory workers dwellings, a market house, paymaster’s house, and the U.S. musket factory. Industries, homes, and lives were destroyed during the Civil War when the town changed hands eight times. Today, the foundations of those buildings are outlined by stones chiseled from the nearby rocks.


Thomas Jefferson described in 1783 the passage of the Potomac River through the Blue Ridge as “one of the most stupendous scenes in nature.” Many hikers have followed the trails and climbed the Jefferson Rock to experience the romance described by Jefferson.


Meriwether Lewis came to Harpers Ferry Armory in March 1803 to supply his now famous Lewis and Clark expedition. Secretary of War Henry Dearborn sent orders to the Armory Superintendent Perkins in Harpers Ferry to help Captain Lewis and advised him to furnish the expedition with weapons, spare parts, and tools.


Meriwether Lewis was President Jefferson’s private secretary and he shared his thirst for adventure and knowledge. President Jefferson had instructed Lewis, “The object of your mission is to explore the Missouri river, & such principal stream of it, as, by its course and communication with the waters of the Pacific Ocean, whether the Columbia, Oregon, Colorado or any other river may offer the most direct & practicable water communication across this continent for the purposes of commerce.”


The arms and replacement parts from this armory traveled almost 10,000 miles to the Pacific Ocean and back and kept the Lewis and Clark expedition alive. Lewis supervised the construction of an iron-framed, skin-clad boat and bought supplies, tomahawks, and rifles. He met Clark in July of that year to begin their journey of “land exploration, waterways, animal life, natural features, and resources of the west.”


George Washington was impressed with the area’s “inexhaustible supply of water,” in an age when water-powered mills and factories were thriving until the Civil War. Water energy powered the Industrial Revolution that caught the town into a frenzy of manufacturing development. 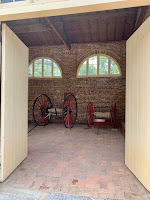 The most controversial figure in Harpers Ferry history was John Brown. On October 16, 1859, Brown and an army of twenty-one men raided and seized the U.S. Armory.  His intention and plan were to spark rebellion to free slaves in the South. He was captured 36 hours later in the Armory fire engine house by U.S. Marines. Brown’s trial was reported and followed closely in newspapers.

“I want to free all the negroes in this state… if the citizens interfere with me, I must only burn the town and have blood,” Brown said before his raid.


John Brown made Harpers Ferry a symbol of freedom. Considered a martyr by some and a madman by others, Brown was tried and found guilty of treason, murder, and inciting slaves to rebel. He was sentenced to death by hanging. 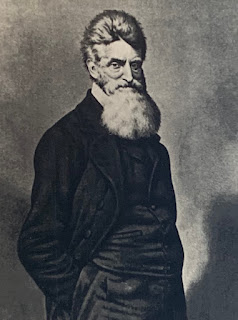 The opening in the Blue Ridge Mountains created by water millions of years ago provided passage on foot, by canoe, by ferries, by canals, and by railroads. The C&O Canal and B&O Railroad provided transportation along the river corridor. The Baltimore and Ohio Railroad (B&O), the first major line in America, still runs through Harpers Ferry.  Tourists today see the bridge ruins jutting out of shallow water and canal remnants as transportation had moved on to railroads and highways.


According to museum archives, “the confluence of the Potomac and Shenandoah rivers was first crossed by a ferry in 1733. Fourteen years later the ferry rights were purchased by Robert Harper and the town became known as ‘Shenandoah Falls at Mr. Harper’s Ferry.’” Robert Harper began the first ferry across the Potomac River in 1747 and it operated until 1824. 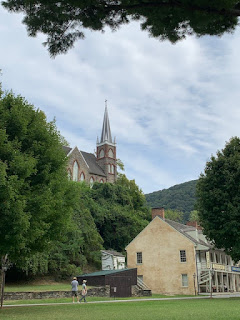 The mountainous terrain and forested landscape became the stage for the Civil War in 1861 and it wedged the town between North and South. According to museum archives, Harpers Ferry was captured and recaptured five times in one day, September 15, 1862. “Gen. Thomas J. ‘Stonewall’ Jackson forced the war’s largest surrender of U.S. troops at Bolivar Heights, Schoolhouse Ridge, and the Murphy-Chambers Farm.”


When fighting started in 1861, attributed in part by some to John Brown’s raid, the retreating U.S. troops burned both federal arsenal buildings to the ground to prevent the weapons from being taken by Confederate soldiers. 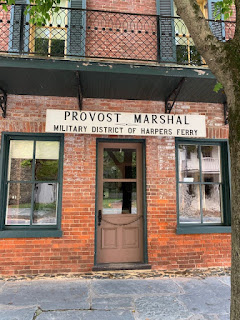 The two rivers, the Potomac and Shenandoah, flooded from time and time and the high-water marks were recorded by the hardware store. Then there were times when the water level was too low, and business came to a standstill.  The C&O Canal was forever closed in 1924. The bridges were closed after they were swept away during the 1936 flood and not reopened until the late 1940s. 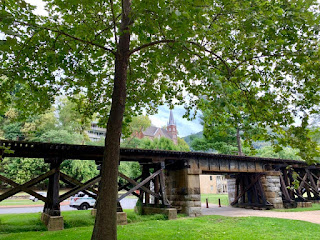 Hiking to Jefferson Rock then, two buildings were visible, a large stone boarding house and a butcher shop and smokehouse erected by local businessman Philip Coons in the 1820s at the request of factory officials. U.S. bought the buildings in 1836, transformed the boarding house into workers’ housing and leased the butcher shop to Coons.


From High Street, climbing the stone steps, one can walk on the Appalachian Trial, passing the Harper House (the oldest house in town), St. Peter’s Catholic Church, ruins, the Jefferson Rock on the left, the gravesite of Robert Harper in the Harper Cemetery, and continue on the Appalachian Trail by Camp Hill and the former Storer College campus.


From the Point, overlooking the confluence of the Shenandoah and the Potomac Rivers, the footbridge to C&O Canal and Maryland Heights is visible and the active CSX railroad (former Baltimore & Ohio) with its modern train station.


Between the foot bridge and the train station there is the original site of John Brown’s Fort and the U.S. Armory Site. John Brown Museum and his Fort in Arsenal Square are clearly visible from the Point. Few buildings are still standing from the lower town as various floods have washed them away and only outlines in stone mark their existence. 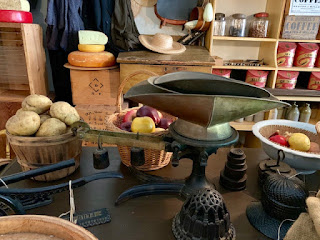 The factory town suffered after the destruction of the Armory in 1861, four years of Civil War, transportation changes, and numerous floods followed by periods when the water table was too low. A brewery was built here in 1895 but the 1914 prohibition forced owners to convert it into a bottling factory for sodas and spring water but then a flood destroyed it completely. 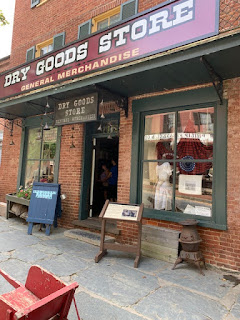 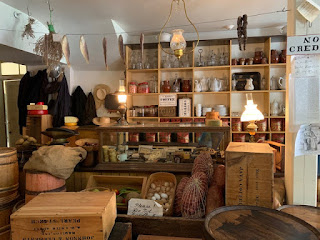 Baptist missionaries founded Storer College after the Civil War.  John Storer donated $10,000. Storer College acquired buildings that were originally armory supervisors’ housing and graduated its first class in 1872 and “made significant contributions to progress for black Americans. It drew prominent men to its campus, including Frederick Douglass and W. E. B. Du Bois, the founder of NAACP.

Dr. Henry T. McDonald, Storer College President, said in 1938, “People from the far corners of the earth will come here to a spot of supreme interest to students of history, students of scenic beauty, and students of nature’s surprising riches.” The school closed in 1955 due to “desegregation, loss of state funding, and dwindling enrollment.” 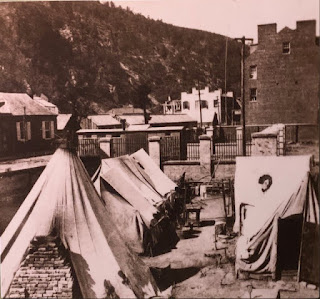 Harpers Ferry provided protection to “escaped slaves” during the Civil War. There are photographs dated 1862, showing the tent encampment at the musket factory yard. Union forces afforded freedmen some protection. “By 1865 there were about thirty thousand freedmen in the Shenandoah Valley.”


Harpers Ferry is connected to the neighboring states through three trails, The Appalachian Trail, 2176 miles long, Chesapeake and Ohio Canal (C&O Canal Towpath) along the Potomac River from Washington, D.C. to Cumberland, Maryland, and Potomac Heritage Trail which extends from Pennsylvania to the Chesapeake in Virginia.


If I could hike through the beautiful forests and rocky terrain from Harpers Ferry, 70 miles more or less, the Potomac Heritage Trail would take me home.

Posted by IleanaWrites at 6:02 PM