From my friend, Livia Bota:

"Fifty-one years ago on Aug 20th, the Warsaw Pact countries, led by the USSR minus Romania, invaded Czechoslovakia.

There was an overall fear that the Soviets would also invade Romania as punishment, so, the day after, my Mom decided that I would spend the night with her at the hospital where she was due for a night shift (Brancovenesc hospital).

Because of the excessive iodine vapors (iodine was used in all Romanian hospitals as disinfectant), I was terribly sick all night, something I will carry with me forever, but the bravery of those Czech rebels, baring their chest in front of the Soviet tanks, far outweighs the misery of my discomfort.  I have never seen this photo before today, and always thought the Tiananmen square confrontation was unique."

Photo shared from Alexandru, thank you! 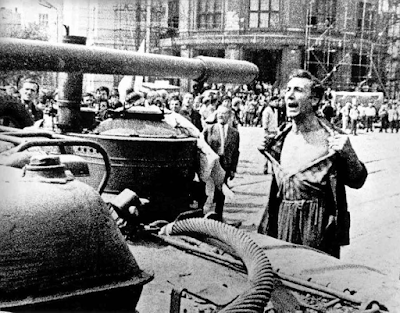 Soviet Invasion of Czechoslovakia in 1968
Posted by IleanaWrites at 4:33 AM