A Visit to the Trump International Hotel in D.C.

I had made mental plans to visit Trump International Hotel in D.C. for months. I was curious to see the Christmas decorations and especially the remodeling which kept the uber-lib D.C. residents up in arms – they hated the idea of a President who loved America and especially hated President Trump.


Located at 1100 Pennsylvania Avenue, in the Old Post Office building, the stately structure with its Clock Tower is now a five-star hotel, ranked number 8 out of 141 hotels in Washington.


The Old Post Office building was built in 1899 and had been used as the city’s main post office until 1914. Functioning as an office building afterwards, it was nearly torn down in the 1920s to make room for the Federal Triangle construction and again in the 1970s for the completion of this complex.


Listed on the National Register of Historic Places, the Romanesque Revival 19th century U.S. architecture building, the third tallest building in Washington, was renovated in 1976 and again in 1983 when a food court and retail spaces were added.


The U.S. General Services Administration leased the property in 2013 for 60 years to a consortium headed by DJT Holdings LLC, a holding company that President Donald Trump owns through a revocable trust. After extensive renovations, the Trump International Hotel Washington, D.C. opened in September 2016.


After a car ride, a metro ride, and a short walk from the metro station around the IRS building, we found the actual hotel entrance. The façade entrance towards Pennsylvania Avenue was blocked and so was the side entrance facing the metro station. The one entrance open towards the metro was actually the entrance to the Clock Tower. The Trump Hotel does not rent this historical part of the building. 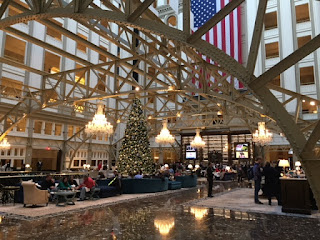 Trump International Hotel atrium
Photo: Ileana Johnson
Taking the longer route to the entrance, around the IRS building adjacent to the hotel, we ran into a share-ride bike with several tourists. The biker was trying to explain that we have to go back when one young pedestrian passing by interrupted and said that we have to go down, down, until we reach the flames of Hades. Not passing up this golden opportunity to put an uber-lib in his proper snowflake place, I interjected, you must have been there, and that is how you know so well. 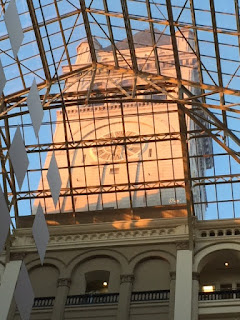 The Clock Tower seen from the atrium
Photo: Ileana Johnson 2017
The Clock Tower, 315 ft. tall, houses the Bells of Congress and rewards the visitors with panoramic views of the District of Columbia and its surroundings, albeit it restricted by dirty plastic windows and vertical wires.


After the thorough check of the contents of my purse, we took two elevators to the Clock Tower and I heard Romanian spoken by an older couple dressed entirely in black. Engaging in a brief conversation with them, I found out that they had escaped communist Romania 50 years ago and had settled in Ontario. I was disgusted hearing this couple praise Canada and its European style socialist nanny government.


I welcomed the frigid winds at the top and the spectacular circular view of D.C. I could breathe freely away from the two ignorant elevator passengers I had struck up a conversation with. The top was heavily guarded by uniformed young men.


With 263 luxurious guest rooms and suites, Trump Hotel had done a spectacular job of renovating the Old Post Office building and turning it into a classy destination. 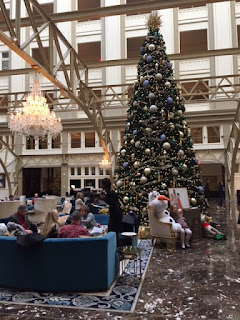 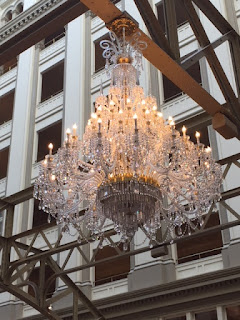 Crystal chandelier
Photo: Ileana Johnson
The atrium was adorned with beautiful crystal chandeliers, a huge Christmas tree, cozy chairs and couches, a bar adorned with empty crystal decanters, a reception desk with its decorative collection of Swarovski crystal obelisks, the bathrooms fitted with gold-plated fixtures, The Spa by Ivanka, and BLT Prime by David Burke restaurant with a balcony seated area overlooking the atrium.


Above Benjamin’s Bar & Lounge was a huge American flag, visible from the Tower elevator, and a glass ceiling which reflected the Clock Tower in the golden waning sun. 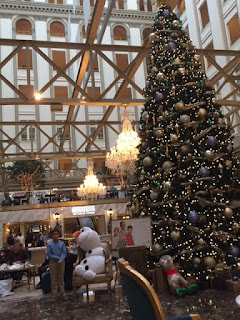 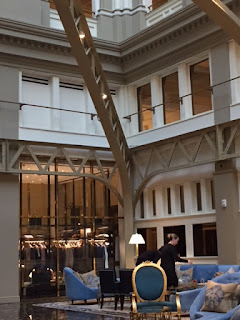 Brioni boutique in the atrium
Photo: Ileana Johnson 2017
An elegant metal box by the Christmas tree was collecting donations for a local children’s charity, the company’s commitment to help those in need. A Brioni couture boutique in the corner of the atrium offered elegant Italian tailored menswear. 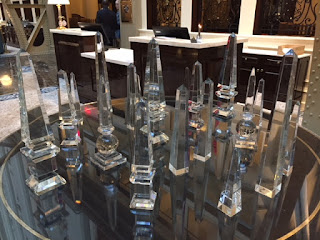 Swarovski crystal obelisks
Photo: Ileana Johnson
We sat in comfortable chairs. It was tea time and many customers appeared to have made tea reservations as they were drinking tea and eating bite-size confections from elegant silver trays. Other sipped on their favorite wines.


We were famished so we ordered food. My salad was passable, the lettuce was fresh and crisp but the chicken was on the dry side. His hamburger was good but certainly overpriced which was to be expected in a five-star hotel. My second cup of chamomile tea with lemon was awful as he used the same tea bag and the water smelled like bleach. The small dessert we shared was European delicious and very light.


Service was very poor. Our waiter practically abandoned us for the next table – the women ordered glasses of wine and my husband and I don’t drink. I found the staff rather dismissive and rude. But it was worth spending $100 on marginal food and service in order to experience the beautifully renovated historic building. 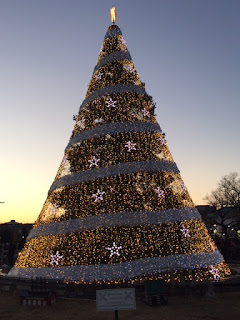 National Christmas Tree
Photo: Ileana Johnson 2017
We left the hotel for the next destination of our day trip – the White House Christmas tree. I was surprised to see how barricaded the area surrounding the White House was. I remember years ago, when Bush was president, we were allowed on the sidewalk beside the fence and take pictures.


The National Christmas Tree was lit by wires of light. The fifty smaller fir trees from each state circled the area.  A miniature train set with Victorian houses was running on tracks at the foot of the tree. I took pictures and we started back on the slow trek to the metro, the car, and the drive home to far away suburbia.

Posted by IleanaWrites at 5:51 AM