We left Florence early in the morning, bound for San Gimignano in the heart of Tuscany. There were no tunnels this time, just large rolling hills covered in lush green orchards, olive groves, vineyards, and agritourist sites where room and board were available, and wine and olive oil for sale.


We were glad we did not have any breakfast; the hair pin curves were non-stop.  The bluish-green vistas with spectacular trees were dotted with terra cotta villas and wild flowers, especially red poppies. My husband is a first class driver and managed all curves like a pro.


We drove by what appeared to be a prison compound, an unusual site in the midst of so much beauty. Tall chicken wire fences topped with barbed wire were encircling a foreboding building with heavy wrought iron bars on the small windows. Two heavily armed policemen were guarding the access road while their car was parked nearby.  It was most unusual to see police on such a picturesque country road especially since we never saw one cop ticketing any drivers. 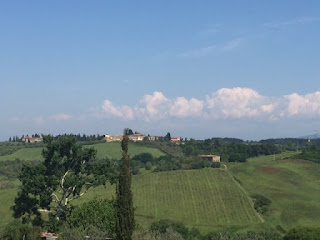 More Tuscan landscape on lower elevations
Photo: Ileana Johnson 2016
Eventually the road opened up to reveal a foggy bluish fortress in the distance with fourteen medieval towers, located at an elevation of 1,063 ft., the unmistakable and famous silhouette of San Gimignano, a walled medieval hill town of 7,768 people in the province of Siena, Tuscany. Known as the Town of Fine Towers, the well-preserved buildings reveal Romanesque and Gothic architecture. 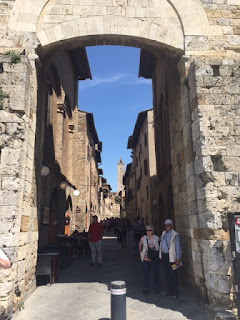 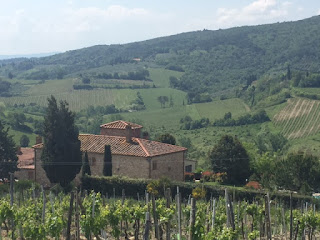 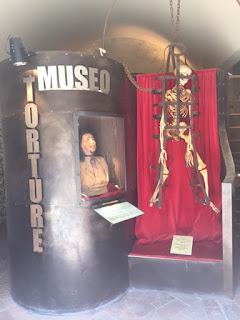 Torture museum Photo: Ileana Johnson 2016
After a minor turnaround, we found a parking spot by the town’s supermarket on the outside of the city walls. We took off on foot on the steep pedestrian cobblestone walkway to the fortress.  We passed by the museum of torture and by several tiny shops of local artisans selling their  crafts and food produced in full view and sold in specialty stores the size of a hole in the wall. 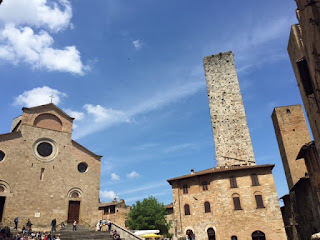 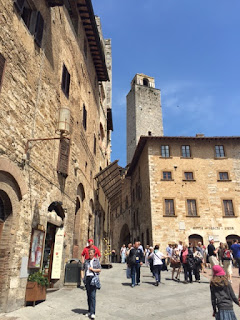 Gelateria in San Gimignano
Photo: Ileana Johnson
San Gimignano produces saffron, a very expensive spice used as medicinal and cooking ingredient, extracted from a purplish flower called saffron crocus, golden ham, and a white wine, Vernaccia di San Gimignano, from an ancient variety of Vernaccia grape which is grown on the sandstone hills surrounding the town, a wine desired by popes and poets.


San Gimignano 1300 museum exhibits models of the city as it was 700 years ago. Everything is handcrafted to showcase 800 structures, 72 towers, lovely street scenes, and figurines all with the attention to artistic detail that Italians are famous for. 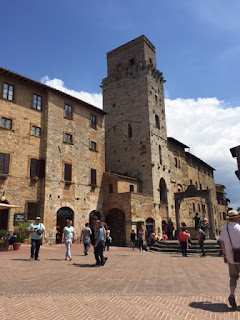 Photo: Ileana Johnson 2016
During the third century B.C., there was a small Etruscan village on the site of San Gimignano. Two patrician brothers, Muzio and Silvio, fled Rome during the Catiline conspiracy against the Roman Republic in the first century, and settled in Valdelsa where they built two castles.


The name of Silvio was changed to San Gimignano in 450 A.D. after the Saint of Modena, Bishop Geminianus, intervened and saved the castle from the destruction by Atilla the Hun’s followers.  The church was thus dedicated to the saint and a walled village was built around it in the sixth and seventh centuries.  The area, surrounded by then thick woods, was called the “Castle of San Gimignano,” and was ruled by the bishops of Volterra.


In the Middle Ages and the Renaissance era, Catholic pilgrims going to Rome and to the Vatican, would stop in San Gimignano to rest before continuing on their pilgrimage. Although it became independent from Volterra in 1199, the conflict between the Guelphs, who supported the Pope and Ghibellines, who supported the Holy Roman Emperor, disturbed the town’s peace for two centuries. The cancerous rivalry between the two clans resulted in the building of towers, taller and taller, 72 by the end of the Medieval period, with a height of 70 meters. A city ordinance, which restricted the height of the towers to that of the one near the Palazzo Comunale, controlled the rivalry.

There is a house which still stands in San Gimignano; it is the home of Santa Fina or Serafina, who was born here in 1238. The Chapel of Santa Fina in the Collegiate Church displays her shrine and frescoes by Ghirlandaio. She is celebrated on March 12, the day she died at the age of 15, paralyzed and attached to a wooden pallet, in unimaginable pain but very positive and encouraging to the world. Because of her invincible spirit in the face of excruciating pain and adversity, she is the patron saint of physically challenged people.

Dante Alighieri is said to have visited San Gimignano on May 8, 1300, as ambassador of the Guelph League in Tuscany. Almost five decades later the city was struck by the Black Death and half of its population died.


Ruled by Florence, San Gimignano built some Gothic palaces in Florentine style while towers were cut down to the height of houses but development stopped and this sleepy little town remained preserved in its medieval form until the 19th century.


It is remarkable that even though other cities such as Florence lost their towers due to wars, conflict, and urban development, San Gimignano preserved fourteen towers of various heights from its original seventy-two.


Movie producers used San Gimignano as movie location such as the 1999 drama, Tea with Mussolini.  A group of women, English and American expatriates in Italy, save frescoes from being destroyed during Germany’s withdrawal at the end of World War II. These frescoes were inside the Duomo, San Gimignano’s main church. 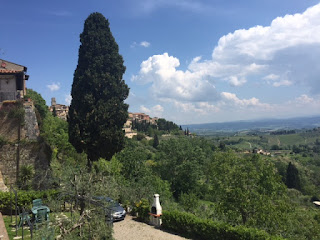 San Gimignano from outside the walls
Photo: Ileana Johnson 2016
After taking more photographs than I can ever store of the breathtaking views, the yellow flowers, the bluish green landscape in the distance, the baby blue sky, the dark green trees silhouetting in the distance like soldiers standing at attention, the vineyards, the red poppies, the yellow and purple saffron flowers, sunflowers, and the watchtowers from medieval times, we left for Volterra.


Posted by IleanaWrites at 6:10 AM